PITTSFIELD, Mass. — The city's losing one of its video rental stores with the closing of the Movie Gallery on Dalton Avenue.

Movie Gallery Inc. filed for reorganization of its American holdings under Chapter 11 bankruptcy at the beginning of February and announced the closure of nearly a third of its Movie Gallery, Hollywood Video and Game Crazy stores across the United States.

According the restructuring announcement on its Web Page, Movie Gallery said the liquidation and closures of 760 stores are "because they are not profitable and because funds from liquidating them can help us moving forward."

The Dalton Avenue store is selling off its inventory and should close within four to six weeks.

The closings do not affect the Hollywood Video on Merrill Road or the Movie Gallery in North Adams in the L-shaped mall. Also closing is the Movie Gallery at 68 Mohawk Trail, one of two Greenfield, and two stores in the Albany, N.Y., area.

Movie Gallery is the second-largest video and game renter after Blockbuster but it's been hammered by changes in rental services, particularly by upstarts like NetFlix and Redbox. This is the company's second bankruptcy in the past three years. The first shuttered at least 400 locations including the Movie Gallery in the Stop & Shop Plaza in North Adams.

The company, which once had more than 3,000 stores, expects to reduce to a stable "core" of 900, which means more closures are likely. The chain had $129 million in losses in the fourth quarter of 2009. NORTH ADAMS, Mass. — Persnickety is expanding to Pittsfield. One of New England's top toy stores will take over the space being vacated by USBluesware on North Street.

Suters was approached by USBluesware owners Giora Witkowski and Linda Mitchell two years ago about opening a toy store in their downtown building. The women had read about the store, which features educational and interactive toys, when it was selected as the Best Toy Store in New England for 2007-2008 by New England Travel & Life. But Suters said it just wasn't the right time to consider expanding.

USBluesware will close up shop on Feb. 27. The store sold "gently used" high-end clothing and accessories from designers such as Louis Vitton, Armani and Chanel. The Witkowski and Mitchell are ready to retire, they told Rural Intelligence.
They hadn't forgotten their offer to Persnickety a few years before. Suters said her ad in Berkshire Living prompted them to contact her again: This time was the right time.

"We were invited by USBluesware, they sought me out when we won the best toy store in New England," she said. "It was a patient waiting game for them to fill all their retail spaces and retire."

The new space is about 1,400 square feet, said Suters. "Just enough I think to do what we want to do." The store won't be a duplicate of the North Adams Persnickety, she said, but instead it will do its best to reflect the tastes of Pittsfield. It will likely have a larger train selection and will do a customer survey to stock items they want most.

She's excited about the transformation of the Pittsfield's downtown area over the past few years and positive about the store's future there: "No question: it'll be a success."

Suters is shooting for an early April opening. USBluesware, meanwhile, is holding a liquidation sale of up to 75 percent off.

Mighty Michelle Obama Shopper Is No. 1 Bag at Blue Q 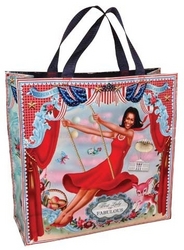 Mitch Nash, co-owner and Art Director of Blue Q says, "They are selling well in red and blue states. We make lots of these bags, but this was the first topical one we've done. We wanted to give it a fantasy feel, to have it embody the feeling of the country being on the upswing."

Since its introduction in October, The Mighty Michelle Obama Shopper has become record breaking seller for the specialty wholesaler.

The bag is not only eye catching but also eco-friendly as it is made of 95 percent post consumer material and 1 percent of the sale of all Blue Q bags and water bottles support the conservation work of the Nature Conservancy.