By Andy McKeeveriBerkshires Staff
05:05AM / Saturday, June 23, 2018Print Story | Email Story
PITTSFIELD, Mass. — There is no longer a need to drive down to the City of Brotherly Love to get Geno's or Pat's or Tony Luke's cheesesteaks. Authentic Philly cheesesteaks are now available right on North Street.
Xavier Jones opened Bigg Daddy's Philly Steak House in Crawford Square on Friday. It is his second location since starting what he envisions will be a local franchise.
"I wanted to do something different. You've got pizza, Chinese, so my thing was let's do something I know that I'm really good at. People always have to travel to Philly to get a good cheesesteak. Now the people up here they can get the same cheesesteak they'd get down there right here," Jones said.
While steaks are in the name, Jones said the restaurant offers a whole lot more than that. And, with the new location, the menu has expanded to include offerings for vegans, gluten-free, and healthy eating options.
"We're more than a cheesesteak place though," Jones said. "We have burgers. We have chicken. We have 12 different flavors of wings. We have 17 different cheesesteaks, four different chicken cheesesteaks."
Jones began with a restaurant in Adams. He said the response had been great and showed him that his idea was worth it. About three months ago, Jones was put in touch with landlord Steve Oakes about the availability of the former Red Apple Butcher's location. Jones said he looked at it and within a week signed a lease.
"I wanted to find a place that was around a bunch of other restaurants. When you have a district, a place people go, a destination area, you do a whole lot better than being isolated. I always wanted to be here on North Street. The first restaurant that I worked in Pittsfield was here, Spice in 2006," Jones said.
Jones has a lengthy history in the culinary industry. The Philadelphia native was trained at Le Cordon Bleu Institute of Culinary Arts and after graduation came to the Berkshires to work at the Red Lion Inn. He then went back to Philadelphia in 2004 to work as a corporate trainer for Longhorn Steakhouse.
"I started liking opening restaurants. I used to be a corporate trainer in Philadelphia for Longhorn Steakhouse. I would travel the country opening restaurants for them. It was sort of a niche that I had that was fun," Jones said.
In 2006, he received a call asking him to return to the Berkshires. This time Jones moved here to open Spice on North Street. Since then he has gone through a series of opening restaurants. Eventually, he crafted his own and opened the first Bigg Daddy's location.
"I'm trying to franchise out. I don't want to close a location. I'm looking to open this up and then open something else up," Jones said.
The Pittsfield location is open from 11 a.m. until 9 p.m. Monday through Thursday and on Friday and Saturday until 10 p.m. for pick up, eat in, and delivery. But Jones said as long as the orders keep coming, he'll stay open. Bigg Daddy's delivers to Lanesborough, Pittsfield, and Dalton. 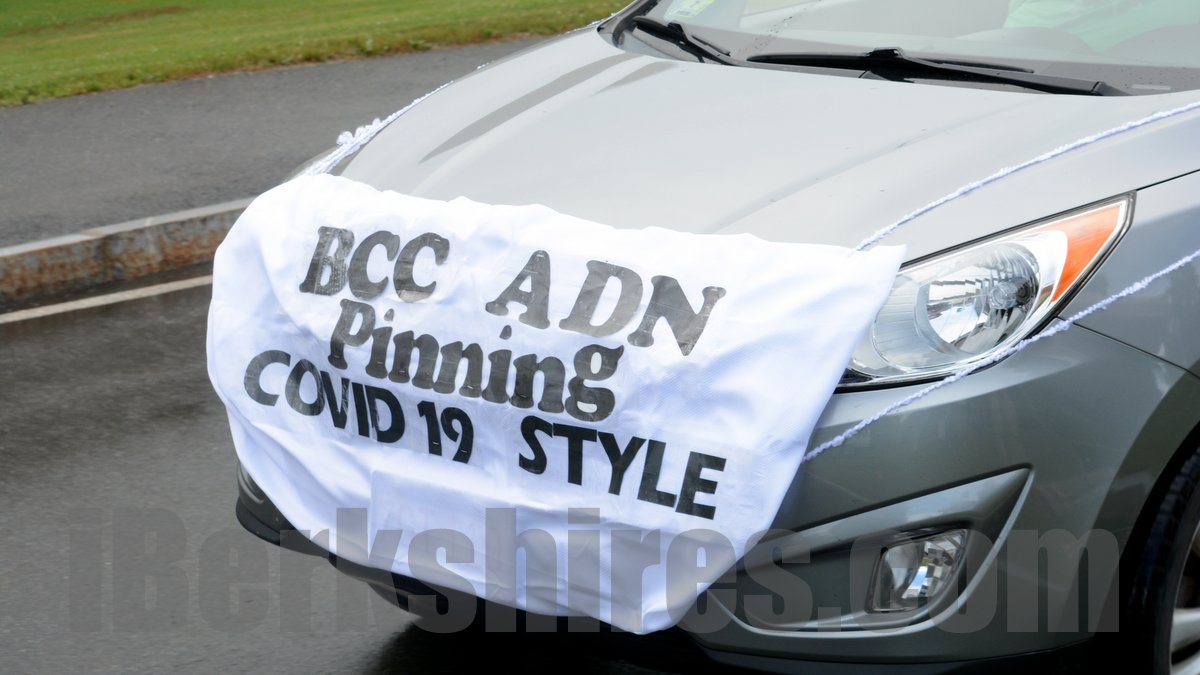 BCC, like many other schools, has been forced to be creative in recognizing its graduates during the pandemic. The graduates have often put their own spin on the unusual ceremonies. See more photos here.

PITTSFIELD, Mass. —Twenty-seven graduates of the practical nurse certificate program at Berkshire Community College and 57 associate degree in nursing graduates were recognized on Tuesday night for a combination drive-through and remote ceremony in order to observe social distancing protocols because to COVID-19.
Ann Tierney, a nursing adviser, retired nurse practitioner and professor of nursing, addressed the practical nursing students while Lynn Geldert, with a background including critical care nursing and providing clinical instruction to nursing students, addressed the associate degree program graduates in the online portion of their ceremony.
The ceremony is a time-honored nursing school tradition, dating back before the turn of the 20th century. Traditionally, nursing students have conducted an honors or pinning ceremony to mark the passage of student nurse role to practice role. It can be an emotional event that is shared with family, friends, faculty and others important to the students' education.
On a rainy Tuesday evening, graduates in the program were invited to drive around the college's circular driveway to receive their pins, certificates and diplomas.
View Full Story
Schools