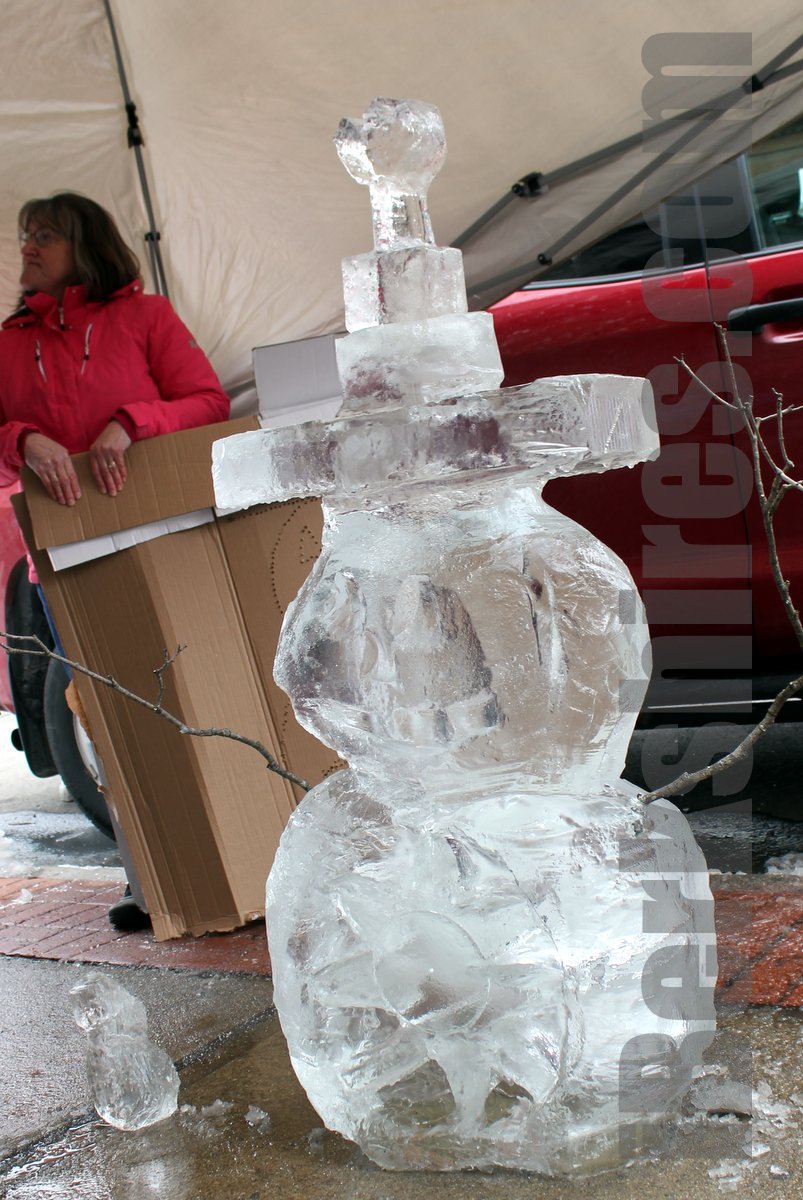 NORTH ADAMS, Mass. — Hundreds of area residents crowded Main Street on Saturday for the 22nd annual Winterfest.
The mild mid-winter temperatures, blue skies and even some snow provided a setting for sledding, ice sculpting and shopping. And, of course, sampling chowder from more than a half-dozen eateries.
Ramunto's Pizza and McCann Technical School duked out for the top spots in the contest, with each racking up one first place in separate categories.
This year's annual Chowder Cook-off saw 348 ballots cast for the People's Choice Award and write-ins for the most unique chowder "Only in North Adams" out of the nine contestants.
Voters were asked to rank their top three favorites, though many just picked one. Competitors were awarded 3 points for every first-place mark, 2 points for each second-place mark, and 1 point for every third-place mark.
The McCann Culinary Program, in its first outing in the cook-off, earned 323 points for first place, with Ramuntos coming in a close second with 310. The Hub, a frequent competitor, wasn't far behind in third place with 303 points total.
The Judges Choice winners were unanimous between the judges, who blind-tasted the samplings prior to the public sampling. First place for that award went to Ramunto's Pizza & Pub for its corn chowder with McCann in second and The Hub once again in third.
Ramunto's also picked up the "Only in North Adams" award for the second year in a row.
The 2019 competitors included Berkshire Food Project, Berkshire Palate, Freight Yard Pub, Gramercy Bistro, Gala Restaurant at the Orchards, and 180 Polish Roadside Grill.
The contest was held in The Green's new quarters in the concourse at 85 Main St. The line out the door was lengthy during most of the two hours and the setup worked to lead samplers around in a circle and then end at the ballot box. Several organizations were set up in the concourse, including Girl Scouts selling cookies the North Adams SteepleCats.
"This was so well organized. Not a bunch of people careening around," laughed David Lamarre, a city resident and former School Committee member. "Every year, [Winterfest] seems to get better."
Lamarre said the event has always been good but it seemed there's been more energy recently.
"I think there's some new blood, people involved who maybe hadn't been before. Maybe they're new to the community ... They just want to prop it up and make everything great," he said.
His wife, Jane, said she enjoyed coming to Winterfest because they would run into people that didn't see often.
"Just to see Main Street alive this time of year," she said.
Over at 66 Main St. in the former mattress store, the farmers' market was offering up crafts, artworks, crepes, coffee and, of course, beer.
Bright Ideas Brewing co-founder Orion Howard, head brewer Danny Sump and Beerology co-owner Mike Schilling started a blind sampling of 13 brews by 11 homebrewers around 11:15, taking breaks with water and oyster crackers in-between.
Schilling said the brews were separated out to compare by style first and then against each other.
"We started with style because we're trying to remove our personal style," he said. "What we think is a personal preference. ...
"There's about 150 styles so you really have to know what you're doing to do it well."
Sump said the winner will get their beer professionally brewed at Bright Ideas — a big jump from the average 5 gallons at a time. Howard said the winners could even get their brew sold at their favorite tavern.
It was, said the judges, "a fantastic group of beers."
Jon Cassel picked first and second prizes for his pilsner and Vienna lager, respectively. Third prize went to Mike Lazzari for his NE IPA.
In the Ice Sculpting Competition, judged by a panel of three local artists on both subjective artistic merit and technical skill, Don Boudreau (and family) win first-place honors and $100 in prize money.
Boudreau's ice sculpture was "The Four Seasons" and featured sun rays, flower and pumpkin face — and ice for winter.
"Things went great," said Suzy Helme, the city's director of tourism and events. "It was a beautiful day and everybody had fun ... Overall, a good WinterFest."