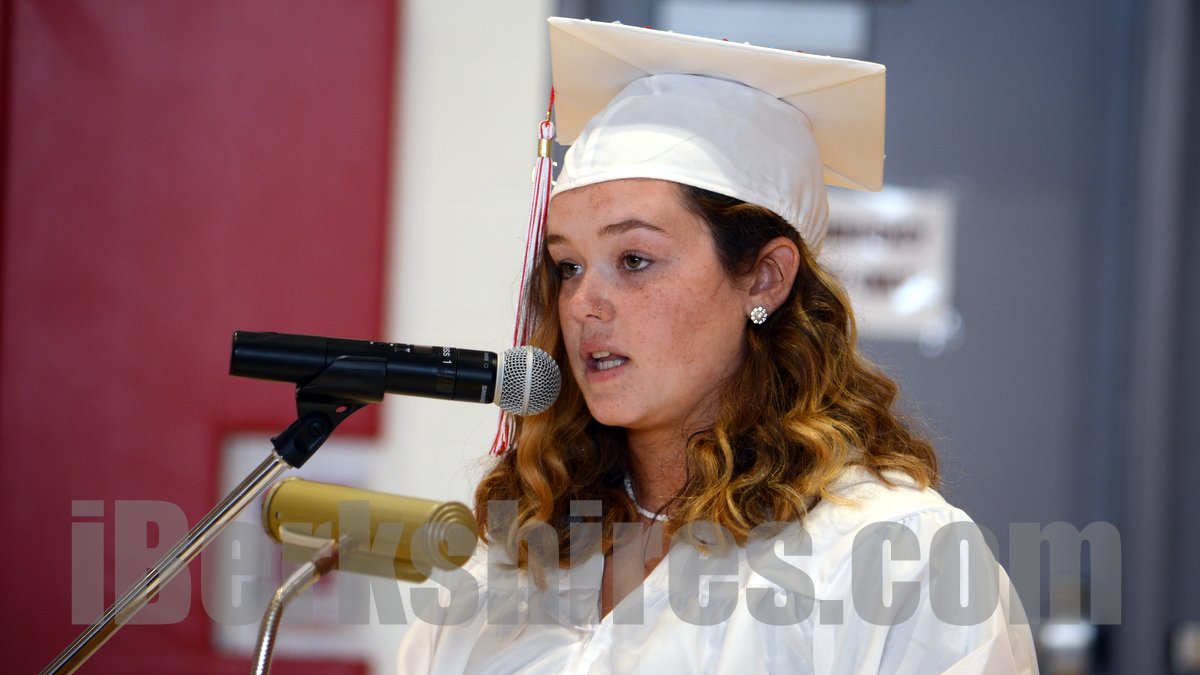 WILLIAMSTOWN, Mass. — Initially divided, now unified yet diverse, the Mount Greylock Regional School class of 2019 was graduated Saturday morning and given one last reminder of how "unspecial" it truly is.
"Because of the stigma around everyone receiving a trophy, calling any group of people unique or special these days is admittedly risky," class speaker Adam Cohen told his fellow grads. "So in response to the people itching to inform me that we aren't that special, I know. In a country of roughly 300 million people, the attributes our class developed likely applies to dozens of other graduating classes.
"But there are thousands of graduating classes, and just because people can't be special, it doesn't mean they can't be rare, and our class is anything if not rare."
Cohen, selected by the graduates, and Clare Sheedy, chosen by the faculty, were the principal speakers, along with Principal Mary MacDonald, as the school's graduation ceremony returned to the Cold Spring Road campus after two years at Massachusetts College of Liberal Art's Amsler Campus Center because of the Mount Greylock's building project.
Cohen's message focused on the unity that his class found within the walls of Mount Greylock — both the old building where it began seventh grade and the new and renovated spaces where it completed its 12th grade studies.
He pointed out the diverse range of interests and socio-economic backgrounds that could be found in the class of 84 decked out in red and white caps and gowns.
"All of this diversity, especially [socio-economic], caused a significant level of tension in those tumultuous middle school years," Cohen said. "As we matured and honed our respective talents, that tension progressively dissipated. In our senior year, our talents and interests are more diverse than ever, but it no longer leads to conflict."
Cohen credited the class with overcoming its differences and, in doing so, learning a valuable skill along with the lessons in math, science and English that they picked up in the classrooms.
"Navigating division and befriending people doesn't just have to be used to fix the world," Cohen said. "It is also an indispensable asset for individual individual success, as our careers will be filled with people different from us, whether you want to be a social worker, data analyst, botanist or entrepreneur."
In addition to awarding diplomas to the graduates, the school bestowed 11 academic awards and two honors to members of the Mount Greylock faculty and staff. Ryan Skrocki was named the school's staff member of the year, and math teacher Bob Thistle was honored as the teacher of the year.
The academic awards recognized on Saturday included: English, Sage Eliah Bohl; history, Jakin James Miller; mathematics, Theodore Janssen Sandstrom; science, Sandstrom; foreign language, Josef Fredy Soza-Foias; Latin, Samantha Rose Trybus; art, Colette Amity Stapp; music, Evan Blakeney Sheridan; business technology, Brennan Alexander McGowan; wellness (health and physical education), Benjamin William Gilooly and Sheedy; scholarship, Maddison Aleigha Albert, Katrina Noelle Hotaling, Dominic Allen Paris, Sandstrom and Luke Robert Swann.
MacDonald noted that her first year as principal at the middle-high school was the year the class of 2019 walked through the door as seventh-graders and shared a poem by Stanley Kunitz, "The Layers," that speaks to the transformations that the graduates have seen and will continue to see throughout their lives.
"Who you will become in your next set of transformations will be built on not only your experiences but what you have learned from them," MacDonald said. "Give yourself the opportunity to consider and apply their relevance and value. Give yourself the chance to revel in the triumphs, especially the surprising ones. You have had so many here. There will be so many more in your future lives.
"Take time to examine the failures but don't be stymied by them. See them as contributing to the layers in your life and recognize that the vibrant lives you will build for yourselves will always include some manner of transformation."
Sheedy talked about how her life was transformed during her high school career by an event that happened on a high school campus 1,400 miles away.
"When the Parkland, Fla., school shooting happened last year, my parents had to shut the television off because I was glued to watching the news," Sheedy said. "How on earth could a school, just like Mount Greylock, have such a tragedy occur?
"This event was a turning point for me because I realized I had something to fight for. I wanted to fight for those who had been silenced. I wanted to make a change and become someone who is able to make a difference for something some students across the country have to fight daily.
"The beautiful thing about this is I wasn't the only person feeling this way. Which is how I ended up on a bus to Washington, D.C., on March 24, with not only my classmates but parents, teachers and my principal. I came home that night with confidence that not only our class, but our generation, is powerful and able to make change happen."