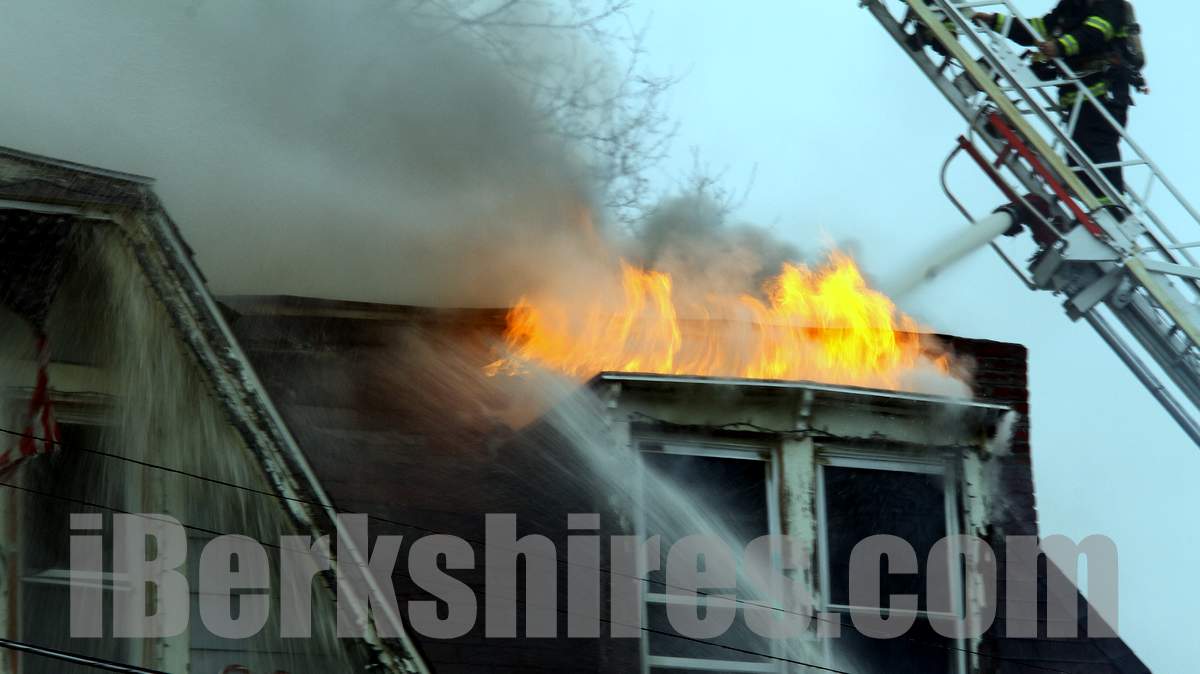 Updated Jan. 11 at 10:10 a.m.: Tuesday’s fire at 246-248 Houghton St. has been determined accidental, according to State Fire Marshal Peter J. Ostroskey and Fire Chief Stephen A. Meranti.
The fire started in the front bedroom in a top floor apartment (the building is on an incline with apartments on the ground, first and second floor). The cause will remain officially undetermined, as investigators cannot eliminate smoking or a space heater as the specific cause. The space heater itself was too badly damaged in the fire to determine if it malfunctioned. The building is considered a total loss.
Working smoke alarms first alerted the resident to the fire. He attempted to fight the fire himself, which delayed notification to the Fire Department. He suffered minor injuries. No other residents of the six-unit building were injured.
The fire was jointly investigated by the North Adams Fire and Police departments and state police assigned to the Office of the State Fire Marshal.

NORTH ADAMS, Mass. — Dozens of firefighters battled a persistent fire on Tuesday at an apartment building on Houghton Street.

City firefighters were joined by members of the Clarksburg Volunteer and Williamstown fire departments in trying to bring the blaze under control while the Adams Fire Department covered the station with preparations to step in if needed.
It took more than two hours to contain the fire enough for firefighters to attack it from the inside.
"It got a good jump start on us," said Fire Chief Stephen Meranti, pointing to the left side of the building. "This whole side was fully involved and on the third floor, we had fire blowing out all those windows and it extended to the front. ...
"The guys did an excellent job."
The fire chief said the blaze appears to have originated in the second-floor apartment on the left side of the building and extended up into the small, shared attic space, where its spread rapidly.
Firefighters were just entering the building at close to 3:30 p.m. to address the hotspots and begin the investigation.
The call came in at 12:45 p.m. and an all-call was sent out to bring in all shifts to reinforce the five firefighters on duty, then the mutual aid call went out. Houghton Street was blocked from Bracewell Avenue north.
The building at 246-248 Houghton St. sits at the corner of Houghton and Brooklyn streets. It has been owned, through a trust, by the late Charles R. Ransford since 1999.
The structure was known as the Owen Morris House and, according to the city's historical survey, was constructed in 1884, although the city's assessor gives it a date of 1870. It was originally used as a residence and grocery store and built by Morris, who worked at Arnold Print Works. It had four units and a public library branch was located there for about 40 years until closing in 1976.
There are six apartments in the structure now. Meranti said four of the units were occupied at the time of the fire but everyone made it out. According to scanner reports, a family of three and a mother and child were awaiting aid from the Red Cross.
A woman said she'd rushed over when a neighbor had pointed to the smoke pouring out of the building. She was worried about her cousins and their dog, but said they'd been able to flee the building.
Northern Berkshire EMS was on the scene with its rehab trailer. General Manager John Meaney Jr. said there no injuries but several people had been treated for smoke inhalation and referred to the emergency satellite facility.
The hillside structure is three stories on the front and two in the back. Heavy smoke poured into the sky above the building and flames poked through the roof in numerous spots. One firefighter who attempted to gain the second-story deck in the rear was pushed back when flames erupted along the back edge of the building.
The firefighters used a drone operated by department photographer Nicholas Mantello to get a bird's-eye view of the building.
"We could see where the fire was going through the roof, where the heaviest fire was, and direct our lines," Meranti said.
The amount of water being poured on the structure was also affecting households in the area. The city through a Code Red alert advised neighboring areas to Houghton that their water may be brown or low pressure.
He said the main problem was access -- the fire was too heavy for an interior attack or to ventilate the roof and there were power lines on three side of the building, limiting the ladder truck to the Brooklyn Street side.
"The problem was there was so much fire on this side, with the limited manpower that we have, we had to focus completely on this side and we couldn't prevent it from extending to the other side [of the building]," he said. "We really we like to get inside and get the fire from the inside but this one was just too big for us to handle."
It was 3 p.m. before firefighters could get into the building after flooding the roof and directing water into the interior windows.
"We're going to continue pulling ceilings and trying to access the building, we're going to try to get the hotspots and we'll break everything down and investigate it," Meranti said.
He considered the building a total loss and said a fire watch would be at the property through the night.
Goodwill Industries of the Berkshires and Southern Vermont posted in a comment on our Facebook page that tenants of the building can go to the North Adams store on State Street for an emergency voucher to help with clothing, coats, blankets and other essentials. Desperados on Eagle Street is offering a special on wings Tuesday night with all proceeds going to help the building's occupants.