James Brehio in North Adams recites the oath he took when joining the Air Force as a young man. See more photos here.

NORTH ADAMS, Mass. — On the 100th anniversary of the first Veterans Day, Air Force veteran James Brehio ordered the veterans in attendance at North Adams' observances to stand front and center.
"Turn around and face the audience and let them see you," said the National Executive Committeeman for the Massachusetts American Legion and keynote speaker at the city's annual ceremony.
Brehio said it takes a special kind of person to enter the service and to recite the 72 words of the oath pledging their commitment to defend the nation against enemies domestic and foreign.
"That they will obey or as well question they will fight the enemy in foreign countries. Countries a man may never have heard of, to defend the people they may never meet," he said.
But fewer Americans are entering the service and fewer still joining the veterans organizations that continue to provide them a seat at the table.
"Today, less than 1 percent of our nation's population is serving in the military, and nationally, veteran population is 9.18 percent of our total population," he said. "You, the veterans, are the country's best 10 percent."
Brehio said his research shows there are about 18.8 million veterans but membership in the American Legion has dropped from an all-time high of 3.3 million in the years after World War II to only 1.8 million today. Veterans organization have been able to put pressure on the Department of Veterans Affairs and Department of Defense to ensure that current and former military personnel are treated right, he said, referring to conditions at the Landstuhl military hospital and the VA hospital in Phoenix that were highlighted because of American Legion advocacy.
Complaining about it around a table at MacDonald's won't improve services for veterans, Brehio said, adding he has two cards — one for the Veterans of Foreign Wars and one for the Legion — both of which give him a voice.
"Just think how powerful, in a perfect world, that everybody that joined the military became an honorably discharged veteran and joined a military organization with 18 million or 20 million voices to be heard from, we would get for all our veterans have earned and all of our veterans deserve, and their families," he said. "Please, have your voice counted by joining a military organization."
Also speaking was Mayor Thomas Bernard, who remembered recently deceased Police Officer Joseph Dragotta, a Navy veteran of World War II, and the city's loss of Army Sgt. Peter Foote in Vietnam in 1968 and Army Spc. Michael DeMarsico II in Afghanistan in 2012.
"Their service reminds us all of our shared responsibility to honor and care for every veteran and every active service member," he said, including today's 2 million women veterans who are being honored by a bipartisan resolution introduced by U.S. Sen. Elizabeth Warren. "So again, let us all stand today resolute in our commitment to serve and honor all veterans."
The master of ceremonies of the event was American Legion 125 Senior Vice Cmdr. Mitchell Keil, who introduced veterans including World War II Navy veterans Bob Nichols and John Ghidotti, absent veterans and attendees including state Rep. John Barrett III. The opening and closing prayers were given by the Rev. David Anderson of First Baptist Church; Drury's Mackenzie Dobbert played taps and Anthony Pettengill, echo. The Drury High band also played several selections.
Members of Boy Scout Troop 35 handed out flags supplied by the Sons of the American Legion and their jockeying to be first to lead the Pledge of Allegiance prompted Anderson to comment, "this Veterans Day, let us again, endeavor to instill in our children sense of pride for our country. ...
"On this Veterans Day, I encourage you in the coming week, take a veteran out to lunch or coffee, not only to give thanks, but to learn from them what motivates the life lessons that were instilled in them in their time of service." The Pittsfield Veterans Day Parade stepped off Friday from City hall. Marchers went down Fenn, North and South streets ending at the Peace Memorial on Veterans Way.
Master of ceremonies John Herrera, former Marine, retired Coast Guardsman and the city's director of veterans services, welcomed and thanked all for attending the ceremony and introduced keynote speaker Marine Corps veteran Curtis Janey.
Janey, who served from 1981 to 2003, said he comes from a proud military family. He said he is one of 11 siblings — eight of whom served in the Army. He was sure this was difficult for his parents and thanked all parents, spouses, and other loved ones who provide critical support to veterans during difficult times while they are away.
"They all have served with us as we went into harm's way and we can't forget them as well because they are the backbone that supports us and allow us to do our job here and abroad," he said.
Janey shared some stores and said he had the pleasure to serve with Carol A. Mutter, a Marine Corps lieutenant general. She was the first woman in the history of the U.S. Armed Forces to be appointed to a three-star grade.
"She was no joke she was a Marine's Marine and she would step to us with a quickness and lighting fast hands if we were out of place," he said. "We all loved her and respected her and to those men out there who think women can't handle the task all you have to do is look to your right or to your left to those Marine women veterans. ...
"The point of today recognizing each and every one of us — men and the women."
Janey said he also feared the younger generation did not truly understand the importance of veterans and what their service and sacrifice means. He did say he was heartened after receiving a letter from a girl thanking him for his service and wishing him a happy Veterans Day.
"That says it all it says it all when a child can recognize the service that we have given to our country," he said.
Before Janey spoke, Herrera read a proclamation from the governor and also reinforced that all veterans are important. He said older veterans often come to him and feel as though they are lesser veterans because they did not see any combat.
He said this is not true and read the definition of a veteran: "a person who served in the active military, naval, or air service and who was discharged or released under conditions other than dishonorable."
During his 30 years in the service, Herrera said he made himself "available to Uncle Sam" even though he did not see combat and that dedication is what makes a veteran.
"So those of you who have never been to combat and you feel that you are less of a veteran I want you to dispell and put the notion to the side," he said. "I respect you as does everyone here so thank you for your service."
Before closing, Marine George Winters was given the Veteran of the Year award. Winters served from 1963 to 1968 and fought in Vietnam. A long list of Winters' accolades was read including work he did to support veterans after leaving the service.
"Thank you, everybody, here," he said. "All of this stuff I did for veterans I did it in memory of my brothers who never came home." 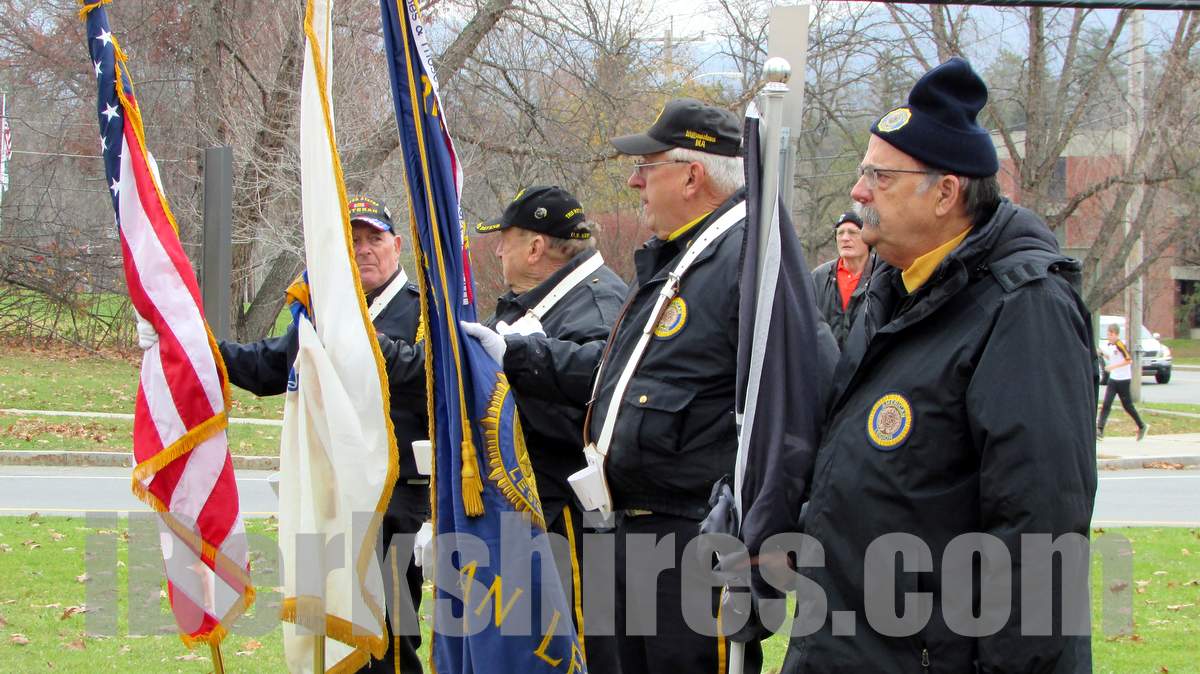 In Williamstown, American Legion Post 152 marked Veterans Day with events throughout the town.
The Legion's remembrances began at Sweet Brook rehabilitation and nursing center and Sweetwood retirement community and continued at the town's cemeteries throughout the day.
At 11:11 a.m., marking the end of World War I in 1918, the main ceremony was held at the town's war memorial at Field Park.
Post Commander and Chaplain Kevin Hamel delivered the invocation.
"Let this day be a day of commemoration to honor all of those who have sacrificed in order to give us liberty and national security," Hamel said. "Remember them, oh Lord, in your mercy, and have compassion on us. Make us a generation of freedom, discipline and good faith. Amen."
Tom Webb and Mary Angelo Roberts played taps for the ceremony. Joe Bushika, Bill Caprari, Bob Gerry and Robert Huberdeau comprised the color guard, and Joe Burnett, Peter Belouin and Paul Langlois performed a three-volley salute.
Staff writers Tammy Daniels, Jack Guerino and Stephen Dravis contributed to this report.